The Most Interesting Man in Trinidad & Tobago. How often have you met a radical, free spirited, fearless man who has influenced the way you think and live? Well the person I have encountered during my tertiary education like this has certainly left his mark on me. He always seems like a man on a mission and if you were to stand in his way he would run you over. He would speak to you the same way he speaks to the police, and what he says is exactly the way he lives. His cowboy boots, the German literature on his t-shirts or the black and white shoes he would wear walking the corridors of the first floor of the Natural Sciences Building will certainly have you question his fashion sense. He is punctual and won’t wait on anyone if you had to go somewhere with him. Many would say he is an acquired taste, but if one was to sit and listen to his stories of his life you get to appreciate how much experiences he has acquired in his lifetime. He once stated that he has never met a person who didn’t have an interesting story to tell and would encourage you to write an autobiography. Well I think it is our connection and experiences with other people and our environment that gives meaning to an autobiography. And so I will attempt to write my story through the network of people I have met in my lifetime that has made my autobiography interesting. This post seeks to introduce you to one of the most confident, intelligent, authentic influences in my life through his actions, the way he lives and what he taught us both in the academic realm and beyond. He is the most interesting man in Trinidad and Tobago.

He was born a Starr.

Professor Christopher K. Starr was born on the 16th August, 1949 during the time when silly putty became popular. The K is silent. (See story here on page 5.)

He is not from Trinidad, but he ate cascadura so I guess he will have to be buried here.

Although he was born in Canada, he has lived in other countries such as Taiwan, Germany, the United States of America and Trinidad; which mean he is either high in demand internationally or he just can’t hold down a job. He currently takes his permanent residence in Caura, Trinidad.

He has romanced the languages.

Having learnt many languages, his travels and experienced ear has the power of distinguishing a French speaker from Quebec outside his country. Funny enough, he still does not have a strong command of the Trini dialect but it is nice to listen to when he tries.

He molests insects with impunity: it is always consensual!

During his tenure in The University of the West Indies, he has worked as an entomologist and his impact on the university has impacted the lives of thousands of students with his wit, knowledge of a bug’s life and his bible quotes at the beginning of Evolution Biology class, (see Leviticus 11:20-23). 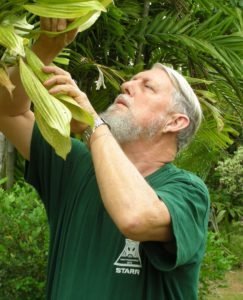 He’s a lover not a fighter.

He has had three wives; a White Canadian, a Brown Pilipino and a Black Trinidadian. I guess you can say he is an equal opportunity heterosexual.

He’s also a fighter too so don’t get any ideas!

He has experiences as an activist in women’s liberation, the anti apartheid struggle, civil rights and gay liberation rights, although he is none of those. (See story here on page 166)

He has amassed a large library of DVD’s.

Yes folks the multitude of chick flicks and spaghetti westerns he has watched over his lifetime has superseded his love of languages. He has over 800 DVD’s and he said that they are both alphabetized and categorized.

Speaking of bugs, He discovered a new species of social wasp named after Peter R. Bacon.

That’s right, you heard me. Read more about it here.

Unfortunately, none of the insects survived to talk about it. He has been stung so many times from venomous insects that you can use his tears for the antidote. Too bad he never cries.

If he commits an offence, the judge will never let him know if he was guilty.

He tried being senile for a month, then abandoned the experience altogether.

Recently he had a condition that has rendered him mildly senile. Upon listening to his tales he hated the experience altogether and after surgery, he immediately recovered his mental powers. Most of the scientific community in the University of the West Indies is grateful for his recovery.

I hope he continues to keep enriching the lives of students that are privileged to work around his company. Professor Starr has truly had some interesting life experiences and we would all be lucky to have a little Starr in our lives. You can read more about his life experiences here.

Do you know this man? Is there a person like him who has impacted your life the way he did for me? Tell us your story in the comment section.