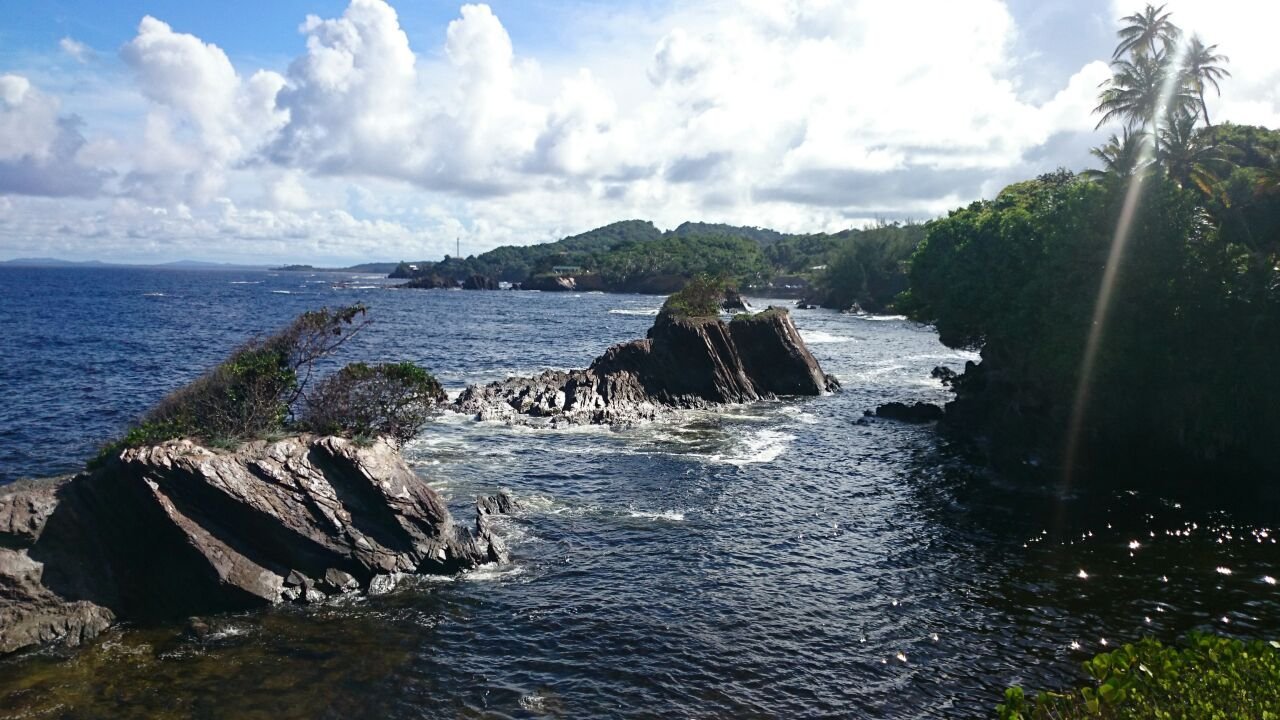 “No one will ever be as entertained by us as us.”

Last year, Friday 16th November, four of us left UWI campus around 5 pm. With bellies full of pizza, and the leftovers saved for later, we embarked on our journey to basecamp: Toco Regional Complex. I navigated the route with the help of Waze while Aaron drove. Our two friends, Kera and Nandani were our backseat conversationalists. I’ve known them both since undergrad in UWI, and they are good friends of Aaron and I. Even though the trip was lengthy, there were no dull moments. We did some catching up on each other’s lives, while Aaron took care to manoeuvre the threatening potholes encountered along the way. When it got dark, we noticed many streetlights remained unlit. This made the drive slower. It’s hard to drive fast when you can’t see beyond your nose! We found out later, that there was a big power outage that same evening which left many parts of the village consumed by darkness. That explained why many homes either sat in total darkness, or were lit by candlelight.

Somewhere along the drive, we piggybacked off the bright, blinding beams from a pick-up truck behind us. It was a bit strange that he took so long to overtake us. Nevertheless, we were most grateful to him for illuminating the way. We mused that maybe he was in fact stalking us! Being silly people, we sent half hourly video updates to our friend, Teshelle who stayed at home. She was our connection to the “civilized world” and in case anything should happen to us, at least our last thoughts, words and laughter would be recorded. She thought we were ridiculous, and got a good laugh out of it!

The truck did eventually overtake us on a long, stretch of road, and left us to light up our own path. That stretch of lonely, dark road reminded me of those travel horror movies. You know, the ones where a group of cheery, unsuspecting friends are on a road trip, and something goes terribly wrong: someone either ends up missing, dead, or both. We joked that if anyone needed to pee, we were not stopping the car. Either you hold it, or pee in a bottle! No serial killer was going to get us that night! And if anything jumped out the bushes in front of the car, well it had better be prepared to become road-kill!

After an estimated three-hour journey, we arrived safely at our destination and parked in the savannah in front of the Toco Regional Complex. Aaron used his scout skills to pick a solid spot to pitch my friends’ tent next to the others there. Nandani ordered a Coleman tent online. It was big enough to fit four people comfortably and based on the reviews, it was supposed to be an excellent product. Of course, we were going to be the judge of that. After 8 pm, Aaron and I accompanied the Terrestrial Arthropod group to do some field reconnaissance for scorpions. The only light on the trail came from the moon, headlamps and cell phones. With a black light in hand, Aaron located a scorpion. On the trail I could hear the ocean, but couldn’t see it! It felt so strange staring into a sea of black, as the cold water made contact with my feet.

I originally planned to sleep in the car, which is why I packed two pillows and a blanket. After my uncomfortable experience sleeping on a yoga mat last BioBlitz, I dared not hesitate to bring along these modern comforts taken for granted! However, my friends invited me to share their tent. Graciously accepting their offer, I spent the night sleeping in a tent for the first time, while Aaron wilfully slept in the complex.

In the wee hours of the morning, I awoke to the sounds of a commotion outside our tent. I heard a voice shouting:

Confused, I realised it was raining outside, and some people’s tents were leaking! Realizing that our tent was holding up quite nicely to the elements of wind and rain, I drifted back to sleep alongside the two heavy-sleepers. It was so hard to care when you’re nestled so cosy and dry inside your tent. Oh well! Better luck to those outside! In the morning there was water pooled around some people’s tents, while others looked sorrowfully misshaped. Our Coleman tent passed the test: it remained leak-proof and secured. I highly recommend it for camping! Aaron and I tried to catch the sunrise on Saturday so we walked down the same trail from the night before. The beach looked so different. The sea of black was transformed into Toco’s beautiful coastline, being used as a breakfast buffet for the many seabirds. The BioBlitz field study officially kicked off at noon on Saturday 17th. All four of us comprised one of the plant groups: Team Forest Mora, accompanied by our driver and plant expert leader, Dr. Oatham. It was a bit heart-breaking that for in order for all of us to fit in the truck, Dr. Oatham’s daughter got the boot. She was asked to accompany her mum in Team Urban Plants instead. We felt bad when we were told that it was her golden birthday that same day! To save our souls, we decided to surprise her with ice cream when we returned.

I was the designated record keeper in our group, and we spent hours noting all the plant species seen on our route, and brought back samples of the ones we couldn’t identify. We returned to base-camp in the evening exhausted. I had a pounding headache, and all I wanted was to take a bath, and sleep. When the rest of the Plant group returned, we sang “Happy Birthday” to Dr. Oatham’s daughter, with the rest of the BioBlitz participants choiring in. We brought back a tub of home-made Soursop ice-cream sold in the village. Hopefully she forgave us! While Kera, Nandani and Aaron took the first shift in compiling and identifying the collected species, I took my rest. I awoke sometime after 8 pm, ready to take my turn. There was still so much to do! People looked so sleep-deprived and ragged with fatigue. I woke till 2-3 am entering data with company before retiring to the tent. Aaron closed his eyes for a power-nap and fell asleep on the stage like a sleeping Dracula, with elbows pinned to sides, clutching his hands to his chest. Dr. Oatham was impressed with Aaron’s ability to fall asleep on the hard-wood floor, and stay in that exact position for three hours! Last year BioBlitz, Aaron fell asleep on a yoga mat, while the spray of the night’s rain washed over him. He didn’t even budge. It’s a gift I envy; he can fall asleep anywhere.

Later that Sunday morning I awoke to discover Kera recording Nandani’s “snoring”. Apparently, there was a friendly feud between them about who was the “snorer” in the tent. Both were in denial about their snoring, and so Kera resorted to collecting evidence as proof of guilt. If only they knew that they both snored! I heard it for myself.

After dismantling the tent and loading the car, we spent the rest of the morning interacting with volunteers from other surveying groups, and partaking in the outreach displays and activities at the basecamp. After a continuous 24 hours of surveying, BioBlitz officially ended at noon on Sunday 18th. The total number of species found for each group was tallied and announced an hour later, with the Plant group recording the highest number: 346 plants. All four of us left after the announcement to avoid driving back in the dark. Once was already enough! When Kera fell asleep on the drive back, Nandani used this opportunity to exact her sweet revenge. She started filming Kera, while Aaron mockingly made loud snoring noises that sounded like a weed whacker struggling to start up without gas. In all honesty, we thought that Kera was on to our little prank. But she wasn’t. When Nandani showed her the video, she was convinced that it was actually her snoring! The snoring sounds were seamlessly in sync with her breathing. We fought back so much laughter! We vowed to never tell her, but I simply couldn’t resist. I’ve kept quiet for almost a year now. Kera’s a great sport, so I don’t think she’ll be too mad!

We never cease to be entertained in the company of good friends.

Looking forward to the next BioBlitz!

1
2+
Author: Nadine
Filed Under: LAL PEOPLE
IMMORTALITY ACHIEVED
A Reptile by any other name …