A Reptile by any other name … “All I wanted was a damn iguana!”

How did you feel after reading your favourite book?

Now compare that feeling to the one you had after watching the movie version.

Did the movie capture the essence of the writer’s original work? Or, was it disappointing because it strayed too far from your expectations?

Not all movie-adaptations do justice to books. I understand that movies, no matter how faithful they are to their written counterparts will always differ on-screen: sometimes slightly, sometimes dramatically. There are moments when I wonder:

“Why did the director make that decision? What was the he or she hoping to achieve?”

However, my inner critic could only speculate so far.

I would try to imagine myself in the director’s shoes…or sitting in the director’s chair with megaphone in hand, yelling “Action!…Cut!” There I’d be in Steven Spielberg-style, handling the million and one tough decisions my crew and cast depend on me to make. All of us, working together as a team, dedicated to transforming hundreds of hours of raw footage into a meaningful, memorable, on-screen masterpiece. All the while staying sane, and sober (well, most times!).

Sometimes I have a tough time following through with plans of my own. Frankly, it’s been happening a bit more than usual these days… so the thought of directing a film from start to finish overwhelms me! Can you imagine the stress? Do you think you have what it takes to handle the pressures of a film-director?

About two years ago, Aaron and I celebrated my mother-in-law’s birthday by taking her to the cinema to see Green Days by the River. 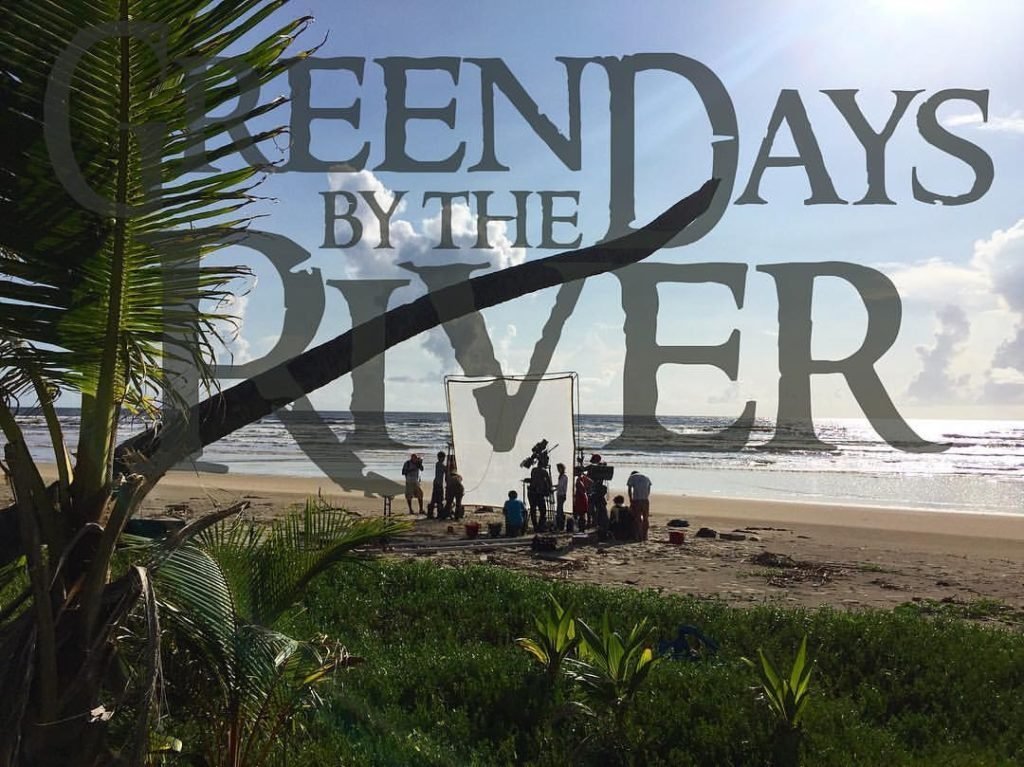 In secondary school, I studied the namesake novel for English Literature for three years. I liked the book, but studying it for that long felt like over-kill. Possibly because we were drilled to analyse the meaning of every little detail in the book. This might also explain why I was curious to see the film; I wanted to compare my own perspective with the on-screen portrayal.

The film’s director, Michael Mooleedhar and Aaron were both school-mates at St. Mary’s College (CIC). With a passion for Literature and the cinema, Mooleedhar pursued his Bachelor of Arts (BA) in Film at the University of the West Indies, St. Augustine. Since then, he has been involved in the creation of at least six films, undertaking one or more roles as writer, producer, director and editor. He’s also one of the founders of the unique clothing brand, Addicted to Progress which reflects his drive towards continuous improvement.

After learning in 2018 that one of the movie scenes was filmed at Mr. Ramdeen’s home in Sangre Chiquito, Aaron contacted Mooleedhar to get the behind the scenes scoop on Green Days by the River. He shared with us an interesting story about how painstaking it was to film the elusive: “Iguana scene” – Spoiler alert! The story below is narrated from his perspective.

For one day of filming, we spent a lot of money. With a crew of varying sizes, sometimes ranging from 10 to 50 people, this money went towards location, transportation, setting up basecamp, meals and providing people with bathrooms. We literally had a truck transporting port-o-potties!

Now imagine, that after spending all that money, you’re left sitting down for two hours with nothing to film. All the while, I’m there thinking to myself,

“We could be shooting something else!”

The producer walks across to enquire why nothing is happening — why I’m not shooting the scene?

Guess what! They lost the iguana.

Eventually, after the two-hour wait, the animal wrangler comes back and says,

“Boy, I can’t find the iguana.” Then adds, “But I have another iguana in the car!”

He then brings the other iguana. Let me tell you something… this next iguana is the “babyest” baby iguana I have ever seen in my life! It must have been half a foot long.

I thought,“You can’t be serious!”

How could I, the director, have the actor playing the scene hold up this baby iguana, pretend to slit its throat, and say the line,

“You don’t know how good iguana meat does be!”

Have you ever looked at movies and there’s a scene that makes you think that it’s not a good one? Well, it’s the same. Sometimes you may be tempted to shoot with what you have then fix it later, but as a director, you have to stand your ground,

“No, no, no. That is just not going to work! We can’t film using this baby iguana.”

Even though I just wanted to get the scene out of the way, I had to consider what the audience was going to think. Like the thousands of people in the cinema watching this and exclaiming, 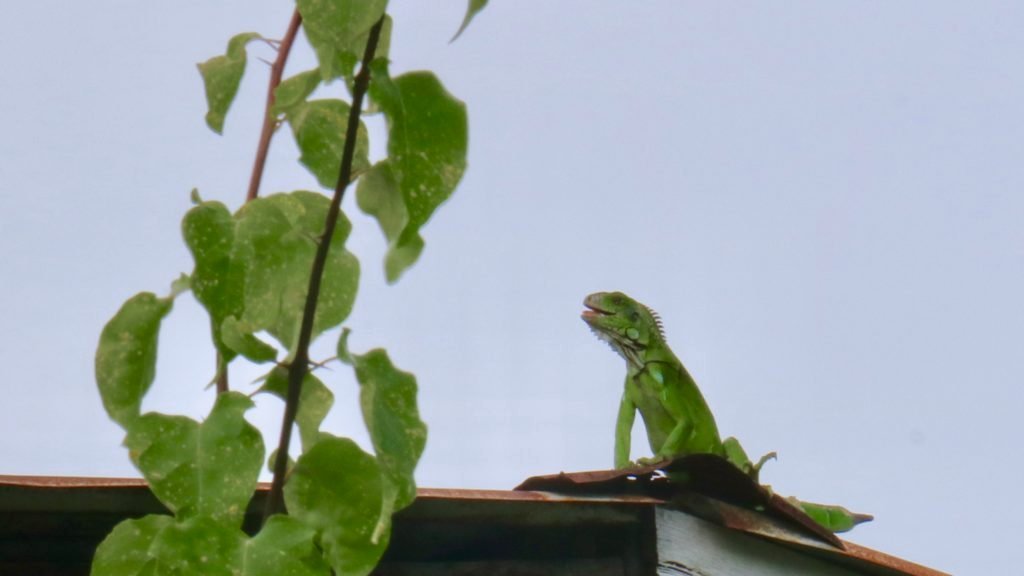 Trinidad is a land full of big iguanas, so you can’t film this baby iguana.

We decided to shoot something else. When this happened, the producer and the first AD (Assistant Director) started going through the script to find another scene to shoot with the actors that were present. We didn’t want to waste the day. Eventually we found something else to shoot and scrapped the iguana scene for that day.

When you don’t get a particular scene, the pressure is on. There is a schedule to follow, and now you’re forced to find another location to shoot this scene for another time. So we put everybody on alert: art department, wardrobe, actors, etc. that we were missing a scene—the Iguana scene. This means that the wardrobe crew will always have the wardrobe ready for the actors to wear for that scene, and the art department crew will always have the props, so that anytime we got a space, we would be prepared to film it.

About two or three days later, we found a space. We notified the animal wrangler in advance and he confirmed that he had another iguana to shoot the scene.

With a short window to get this iguana scene done, we were moving with pace. At the new location, we were busy setting up, with about 30 minutes to spare before filming. That’s when we got “the call”.

Apparently, the man with the iguana had a meeting in San Juan prior, and was now on his way to meet us. But he was stuck in traffic. Remember, Trinidad has a lot of traffic. We were filming at the back of the airport, somewhere deep, deep, in the bush. He just wasn’t going to make it in time. We ended up scrapping the scene again, and proceeded to shoot something else. This was the second time I could not shoot this iguana scene. And so for the next two weeks, production was carried out without filming it.

So, why all the fuss? Well, this scene was critical. It is when Shell sees Mr. Gidharee for the first time in a different light — Mr. Gidharee slits the iguana’s throat, then looks at Shell. That’s when Shell notices that, as nice as this man was to him, he was cold.

With only a few production days remaining, we started to have conversations about whether we really needed this scene. As a director, I too started to question myself — Do I need it, or do I not?

On the last day of production, we were running on barebones; we basically had nothing in the way of funds. We invited people who wanted to come out and work for free, but we didn’t get that many. That’s fair because they had a long 26 days’ shoot. People were tired, and the thought of giving their free time wasn’t appealing. Even I wanted to go home and sleep. That’s the reality of it. It’s hard work.

It starts off as fun, but when you’re on day 16, day 17 of filming, it’s like a grouse. People are just drinking coffee; they want 3 days off; they’re tired because you are pushing hard to make this movie. Even I’m tired. Everybody is tired.

There was a day I went to the Hyatt. I turned off my cell phone and went to sleep for a night. I was living in the production house where everybody kept asking me questions. I just needed rest.

Now only armed with a small crew, and a van packed with everything we could possibly need, we prepared to film this iguana scene for the last time. The production manager gave me the animal wrangler’s number. I was not messing around with this scene. In the evening, I called him to arrange for our last day of filming. I told him,

“I need you there early at 7 am. It’s the first scene we’re shooting.” He confirmed.

Then at about 10 pm that same night, the man called back. He said,

“Boy, this iguana not looking too good. He got the flu.” I asked, “What do you mean the iguana got the flu?”

This was the last day of production and I needed this scene badly.

So after 10 pm, I was calling people to try and get a damn iguana. Hunting season was closed, so it was illegal to have an iguana that wasn’t a pet. There were people who volunteered to catch an iguana in the bush, but that would have been against the law. As a film-maker, you’re not trying to break the law, so I refused the offers.

The iguana man called back at 11 pm and said that there was a mucous coming out of the iguana’s nose. I didn’t want the iguana to die, so we cancelled his debut. But then the guy said that he had a caiman.

I questioned, “You have a caiman?!”

Knowing that we had to shoot the scene somehow, I told him to bring the caiman.

So at 7 am the next morning, everybody showed up and we were trying to organize the shoot. I didn’t say a word to the actor, Anand Lawkaran, playing the role of Mr. Gidharee.

I told Anand, “Go over there and talk to that man. He has the iguana.”

He went, then came back. He told me that it wasn’t an iguana. It was a caiman! I told him the wrangler would show him how to hold it. He watched me like I was mad. He couldn’t believe that I wanted him to hold the caiman. I told him not to worry.

And so Anand got training with the caiman; he was instructed what to do, and what not to do.

Now I don’t know what went on with this caiman. It’s like he experienced some kind of trauma or something. The caiman was active, walking along lively, with his mouth taped before the filming of the scene. It was only when the caiman saw the blood and the cutlass, he started to play dead. Every time he saw the blood and the cutlass, he just played dead. He wasn’t moving. I think he understood; not that he was being filmed, but that,

And that’s how we ended up filming the iguana scene using a caiman instead. In our next post, Mooleedhar shares how he pursued film-making in a country with a “green” film industry, and inside his mind as a director for Green Days by the River.

Still haven’t seen the film yet? The film is currently available for either purchase or rental on Vimeo on Demand and through the website Greendaysbytheriver.com.

I highly recommend it!

***Please note that no animals were harmed in the making of this film.

3 thoughts on “A Reptile by any other name …”