“If you have to be addicted to something, you should make it progress.”

Every film-maker made his or her start somewhere. Michael Mooleedhar, one of Trinidad and Tobago’s film directors and producers is no exception. He is most recently recognized both locally and internationally for directing his first feature film Green Days by the River. The film, based on the novel of the same name by local author Michael Anthony has won both the Best Trinidad and Tobago Feature Film Award and People’s Choice Award Best Feature Film Narrative at the Trinidad and Tobago Film Festival in 2017.

Always playing the lead character in his own life, Mooleedhar shared with us some of the moments that defined him, both personally and professionally.

“I started in film in the weirdest way ever. When I was in Form 6 at “CIC,” (St. Mary’s College), I was an usher at Movie Towne, Port-of-Spain. After school, I would go Movie Towne and do a shift to earn some extra money. While working there, I literally watched all the movies. I used to have this feeling that I can make a better movie than some of these. And that was in a very naive way!”

It was this exposure to the big-screen, combined with a passion for Literature that steered Mooleedhar towards his future career path.

“Literature was my favourite class in Form 6. I used to not take other classes as serious, but Literature would be the class that I would make sure and go to. We studied William Blake, Macbeth, Derek Walcott, and some other Caribbean stuff too.”

When Mooleedhar got a “real job”, he realised soon enough that being in an office setting just wasn’t for him. During that period of self-realization, UWI’s film programme was just starting-off.  He applied for the 3-year Bachelor of Arts degree in Film Production where he gained more insight into the industry.

“Cut to the chase”

Mooleedhar began as an editor while pursuing his degree.

“I ended up meeting one of my mentors, Professor Patricia Mohammed. One of the first things I did was edited her film, Coolie Pink and Green, and helped co-produce it.”

This background laid the solid foundation for Mooleedhar’s directing career.

“When you’re an editor, you understand all the shots you need; you can see the film through an editor’s eyes. So when you are on set directing, you know what you need and what you don’t. You know what you can make the movie work with.”

Developing this skill served Mooleedhar well while directing Green Days by the River when budget restrictions cropped up.

Dawn Cumberbatch, the screenplay writer for Green Days by the River (GDBTR) sent Mooleedhar the script while he was working on the short film The Cool Boys (2012). “I read it but I wasn’t sure if this was the next movie for me. I wanted something more edgy at that point in time.”

Five years later, Mooleedhar reconnected with film school colleague and producer Christian James. They met up at UWI’s building launch ceremony for its Film programme. Both got to talking about projects, and GDBTR came up during conversation. Later on, Mooleedhar sent Christian the script.

That’s where we got going.”

What’s the film about?

The film Green Days by the River is based on “the classic novel” written by our Trinbagonian author and historian, Michael Anthony. 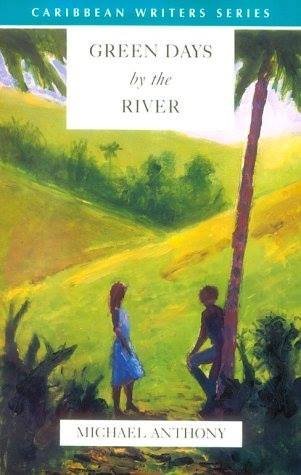 “It’s a very Caribbean story; it’s a book that a lot of us grew up with reading.”

Simply put, it’s a coming of age story; about an adolescent boy named Shell growing up in the rural, fishing village of Mayaro during the 1950’s. Shell finds himself caught in that transitionary period between boy-hood and becoming a “man”, while trying to figure out love, exploring the potential opportunities around him, and learning the tough lessons which ultimately shape his future.

“What’s interesting to me is that Shell’s a character that never really rises to the occasion…it feels as though a lot of things are just happening to him and he doesn’t do much about it.”

The Language of Cinema

What do all films have in common? If you remove the subtitles from foreign films, can you still follow along, even if you only catch the gist of it?

Cinema, like speech and writing is an audio-visual language; it is how the film-maker communicates with the audience. I like to think of it as the “director’s invisible voice”, subtly guiding and influencing your thoughts and feelings, while engaging you in its storytelling.

“If your diet of films is for example, only Hollywood movies, and you don’t expose yourself to Indian (Bollywood) cinema, German cinema, English cinema, etc., then you will only know this “one language”.

Mooleedhar practises his fluency in cinematic language by expanding his film-viewing repertoire.

“I am exposed to world cinema. I will watch movies from all around the world, for example, In the Mood for Love, a Hong Kong film by Wong Kar-wai. I know there are different cinemas out there and different film languages. The intention is not to copy any particular language —we don’t have the budget to compete anyway— but instead to create a film that has its own Caribbean voice. One that reflects what our cinema might look like, and what our cinema could celebrate.”

“It’s all in the details”

Film-makers have a responsibility to be authentic. When you look at the film GDBTR, you’ll sense that the tempo of the film is very slow because the movie was set to mimic the pace of life that existed in the 1950’s.

“Life wasn’t fast-paced in 1952; it wasn’t like how it is now. They didn’t have a lot of cars, and that’s why the film doesn’t have a drone shot in there.” “We (Cinema) have the opportunity to make different types of films since we receive independent funding. So I took the opportunity to set the tempo at a 1952 pace. At the end of the day, although I’m creating an entertainment product, it should be credible. Shell’s (main character) life was not moving at an incredibly fast pace. If he had to go to the beach, he had to walk. That’s why we chose to have those moments.”

When you read the novel, you always “hear” what Shell is thinking. To represent this first-person viewpoint “visually” would have required a voiceover. However, Mooleedhar went with his “directorial gut” and excluded this.

“My vibe was—I don’t feel like this movie needs a voiceover. It will slow it down too much so we should just tell the story with the images. So we didn’t take that from the book.”

So what was the replacement for the voiceover?

In the film, you’ll notice instances where the background looks blurry, then slowly comes into sharper focus. This is a film technique called rack focus, which is changing the focus of the lens during a shot.

“This is purposely done, so it’s not a quality problem. It’s a way of carrying the internal voice of the main character.”

You will realize that Shell is always in the shot, but you would only notice the back of his head as he looks on at the next character. It’s like getting the audience to “stand in Shell’s shoes”; you see what he sees.

“The coverage is centered around Shell. It’s to focus the audience on his perspective of what is happening around him and his life.”

Peeling back the Layers – Spoiler Alert!

A good film, just like a good book is “layered”. The first layer represents the story, but then the other layers reveal something underlying; a deeper meaning. Mooleedhar cleverly mixes and adapts the metaphors from the book to help build the language for the film.

“There was a whole layer dedicated to referencing birds. The bird in the cage represents the main character Shell, and is a comment on his freedom. That is why when Mr. Gidharee puts his hand in the cage to hold the bird, the scene was more like a dreamscape. It represents the idea that Shell is no longer “free” because of what he did with Mr. Gidharee’s daughter, Rosalie. Mr. Gidharee “captured” him.”

Mooleedhar evokes feelings and provokes thoughts from the viewers.

“I want people to think about choices.”

“The film is about choices and fatherhood. That idea of masculinity and how it’s represented with Mr. Gidharee, Pa Lammy and Shell. Pa Lammy wanted to be there for his son, Shell but he was too sick. Somewhere along the way, he realised that Mr. Gidharee might be a suitable father-figure for Shell. It was a good opportunity for Shell, given Mr. Gidharee was coming from a certain amount of wealth.”

Mooleedhar also intertwines educational awareness into the fabric of the film.

“I don’t think kids nowadays know the type of music played, or the dress code for a disco in 1952. I want them to learn about life back then. Although we don’t get too much into it, the film was set in the period when Trinidad and Tobago was still a colony of England.”

“I want people to have a connection to the past, to bring back a sense of community and love. I grew up liming under the mango tree. You don’t really see people or kids outside like that now because they’re on their computers.”

“I want Trinidadians to feel that sense of pride. This is Our story; something unique from us.” Dialogue between Mooleedhar and Michael Anthony:

M:        “What other author do you know has a movie made from their book from Trinidad and Tobago?”

Apart from the film-making connection, Mooleedhar developed a close bond with the author.

“Michael Anthony is like a grandfather to me. We have a good relationship.”

As two artists, they share a common love for the arts and hold many conversations.

“He’s my link to the past. We had a long discussion on The Empire Windrush—that discussion is still on-going over the span of about 2 months.”

Both were introduced to each other by the screenplay writer, Dawn Cumberbatch, and after negotiations, Mooleedhar and his team secured the film’s rights.

“We were straightforward with him. We told him we were committed, and that we were going to make this movie.”

During the film-making process, Mooleedhar kept the 87-year-old author closely involved every step of the way.

“As a director, I would discuss with him the screenplay and the book. It was really based on his childhood growing up in Mayaro. For the most part, it’s self-autobiographical at times.”

Who better to consult than the writer himself! From describing small details to the art department crew like what his bedroom looked like as a boy—the walls plastered with newspaper because they couldn’t afford wallpaper—to providing guidance on Shell’s character to the actor Sudai Tafari who portrayed him, the author’s input helped to deliver that sense of authenticity to the film.

“He played the role of Mr. Prefat, which he was very happy about. That’s the scene where Shell was walking across the road and said, “Good morning Mr. Prefat!”

In our final post, Mooleedhar gives insight into the messy side of film-making; the business side, and the price-tag attached to the film’s success.

The film is currently available for either purchase or rental on Vimeo on Demand and through the website Greendaysbytheriver.com.

1
1+
Author: Nadine
Filed Under: LAL PEOPLE
A Reptile by any other name …
Addicted to Progress

2 thoughts on “These short stories long like long time!”